Often when I tell people that I am gluten intolerant they usually remark on how common it is becoming these days and that when they were younger they never had a problem with digesting wheat products.

The fact is, they are right. 50 years ago the word gluten was virtually unheard of. Now it’s everywhere.

But is it really a problem for everyone? Those with coeliac disease can be certain that they must stay away from gluten. But for others, why has it become a problem? Is it because we think its healthier to eat this way?, is it because we have become “brain-washed” by documentaries like ‘What’s with Wheat?’, is it because we are eating so much of it – so like all things when not eaten in moderation, becomes harmful to us, or is it because of the hybridisation of wheat and how it is literally not the same wheat that human kind has been eating for over 10,000 years?

I’ve read up on a lot of sources. Australian Government publishings on the biology and ecology of Bread Wheat, various websites & blogs dedicated to un-covering the mystery we are currently facing regarding wheat (careful not get stuck on those who are biased for either side), and also many that come from the US which may have little impact on us unless we are eating exported foods from the US, Mexico, India or Pakistan (they share the same wheat that was hybridised by Norman Borlaug)
As I was researching I didn’t want to share with you facts that have been copied and pasted from like minded sources and vomit up the exact same bias material here. I wanted to understand and share the cold hard facts that can be agreed on from BOTH angles and then let you be the judge. So here are a few common worries, facts & beliefs about wheat today.

Wheat is a type of grass grown all over the world for its highly nutritious and useful grain. It is one of the top three most produced crops in the world, along with corn and rice. Wheat has been cultivated for over 10,000 years

This is correct. Early Egyptians are believed to be the first to create loaves of bread almost 5000 years ago. Ancient varieties of wheat include spelt, emmer (farro), einkorn and Khorasan (kamut). What you may not know is that wheat was subject to hybridisation in the early 1900’s and since that time almost every civilisation around the world has developed their own version.

Hybridisation is the process of an animal or plant breeding with an individual of another species. In the case for Wheat – to create a stronger & hardy, pest-resistant wheat with a long shelf life.  (note that hybridisation is completely different to genetically engineered, GE has yet to be proven safe for us to eat)

– Why was Wheat hybridised?

Starting in the 1900’s, and increasingly in the 1950’s, plant breeders undertook efforts to produce hybrid wheat varieties with the goals of improving yield and disease resistant strains of wheat. This was in an effort to avoid famine and minimize world hunger.
The most common strain of wheat is the high-yielding dwarf wheat, produced by Norman Borlaug. Borlaug, along with others launched what is known as the “green revolution”. Yields could be doubled or even trebled with heavy doses of synthetic chemical fertilisers and other inputs. Because of this discovery, countries such as Bangladesh, India and Pakistan are said to have averted famines and started to export grains.
So to summarise, Wheat was hybridised for rapid production essentially to feed more and more people around the world. But at what cost?

– How is the entire process of wheat different today?

Since industrialisation almost everything has changed. How we grow the wheat, how we process it and due to hybridisation, even the wheat itself!
In 1870, the creation of the steel roller mill gave birth to the processed food industry. Prior to this, wheat was processed by old stone methods. Stone methods essentially mashed everything together, but what people wanted was the “fancy white” flour. So by introducing the new steel roller mill, you could essentially seperate the components of the kernel so that you could have the finest white flour. The steel roller mill became so popular that in just a decade it replaced all of the stone mills in western civilisation. And why wouldn’t it? This new flour lasted quite literally forever. Pests didn’t want it! Many believe that this is due to the fact that almost all of the nutrients were stripped from the grain in this new milling process.
To add to the process, we also used to prepare our grains differently. They were soaked, sprouted, fermented and bread was baked using slow rise yeast. Which now was no longer the case for this fast to make white flour.
Now pair this hybridisation (Borlaug) and the new milling process, you can see why wheat has been significantly modified and why it’s not even a question that we are eating something so entirely different than what out ancestors did.
According to Wheat Belly author Dr. William Davis, “this thing being sold to us called wheat—it ain’t wheat. It’s this stocky little high-yield plant, a distant relative of the wheat our mothers used to bake muffins, genetically and biochemically light-years removed from the wheat of just 40 years ago.”

– Isn’t Wheat only in bread and pasta?

Wheat is in almost everything we consume these days. Bread and pasta are your typically known wheat products. But now its in almost 70% of your supermarket produce.

– Are we eating more wheat these days?

If you had no idea that wheat was in those above foods, then yes. The problem is that we aren’t aware of the actual ingredients in our foods. If we knew, we could be a lot more careful and eat wheat in moderation. We should also investigate further into our own bodies and our own tolerances and see how well we as individuals can process the grain.

I’ll finish this post with two completely opposing views on the situation that is Wheat.

“I don’t think it’s worth freaking out over every exposure to white flour. If you are a healthy person and eat a mostly healthy diet, I truly don’t think a little conventional white flour — and yes, even a little bit of the toxins that accompany it — every now and then is going to really hurt you”

“We have mutant seeds, grown in synthetic soil, bathed in chemicals. They’re deconstructed, pulverized to fine dust, bleached and chemically treated to create a barren industrial filler that no other creature on the planet will eat. And we wonder why it might be making us sick?” 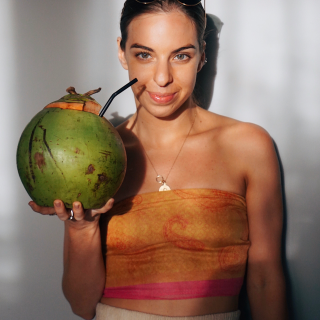 Hey there! My name is Cat Santos and I am based in Sydney, Australia. I work as a professional dancer & teacher and because of the nature of my work, I spent majority of my life working on my body and what it looked and felt like on the outside. Later in age I found myself not feeling 100%, it took my skin breaking out for me to finally explore & learn about my body on the INSIDE and how it affects me not only physically but mentally & emotionally as well. This passion led me to discover all things to do with gut-health, overall wellbeing and places & resources that support this life-style. I've created this page to share all the mind-boggling information that I keep learning about with you! Falling in love with my body on a deeper level changed my life, I hope you find a way to fall in love with yours too. Love, Cat.